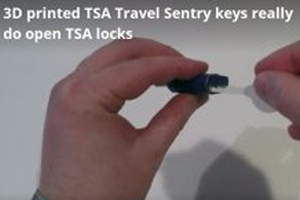 LONDON — The Office of Naval Research (ONR) is making giant strides in its quest to develop the next generation of unmanned aerial vehicles (UAVs), but hopes that their introduction into service will result in manpower savings may be misplaced.

Addressing a seminar on U.S. and U.K. future air dominance at the DSEI exhibition in London on Tuesday, the commander of ONR Global said that progress was being made on several “leap ahead” initiatives: the Autonomous Aerial Cargo/Utility System (AACUS), Tactically Exploited Reconnaissance Node (TERN) and Low Cost UAV Swarming Technology (LOCUST) programs.

echnology priorites for the U.K. Royal Navy – which include autonomy, additive manufacturing (3D printing), power and energy, interoperablity and big data – were closely aligned with the ONR’s needs, he noted.

40′ tall, 20′ diameter, delta #3Dprinter will build entire houses out of mud or clay

WASP (World’s Advanced Saving Project) is set to unveil Big Delta, reportedly the world’s largest delta 3D printer, later this week. This 12-meter (40 ft) tall behemoth was brought to life with the purpose of building nearly zero-cost housing through the use of local materials and as little energy as possible, offering quick and inexpensive relief to disaster areas and addressing the future housing needs of a rapidly growing world population.

Back on our own planet, 3D-printed houses may be about to become more and more commonplace as the United Nations predicts there will be a need for almost a hundred thousand new homes daily, worldwide, for the next 15 years.

Gizmag has the scoop on the largest 3D Printer to date

30,000 pounds is among the highest thrust levels ever demonstrated for a 3-D printed part

The Dynetics and Aerojet Rocketdyne (NYSE:AJRD) team recently performed with its NASA partner, the second successful gas generator test series of the F-1 engine as part of the Space Launch System (SLS) Advanced Booster Engineering Demonstration and/or Risk Reduction (ABEDRR) contract. This test series was unique, however, in that a key component of the gas generator was built using additive manufacturing – or 3-D printing – techniques. At 30,000 pounds, the component is among the highest thrust levels ever demonstrated for a 3-D printed part.

n 2013, an F-1 gas generator made with 1960s-era parts was tested at new conditions to verify its applicability to the NASA SLS requirements. Testing the 3-D printed gas generator provided an opportunity for a one-to-one comparison of a part built with traditional manufacturing to a part built with the SLM process. The two test series were highly successful and the results were nearly identical

SpaceRef has 30,000 pounds of details

The command’s focus is on agile combat support. Combining AFMC’s cost-saving abilities with the organization’s innovation is how the command is harnessing the coming aerospace revolution, the general said.

When asked what her research and development priorities were, she named the game-changers in technology: speed, ability to reduce manpower, lasers and additive manufacturing.

“Additive manufacturing has the capability to change the calculous of how we maintain weapon systems,” she said.

The Air Force has the full debriefing here

In 1996, the Spice Girls told us that ‘tonight is the night where two become one’, but one fortunate family have good reason to celebrate a night where one became two. Additive manufacturing is regularly used to save time, money and the environment, but relatively few people can claim to have had their lives saved by it. Tyler and Tyson Proctor, a pair of formerly conjoined twins whose life-saving operation was helped by the use of 3D-printed models, have celebrated their 1st birthday in the hospital in which they were operated upon.

Traditional imaging techniques were not able to provide all the answers in the Proctors’ case. For example, doctors could not be certain where their gallbladders were in relation to the midline. The 3D rendering created an accurate model of the boys’ biliary systems, which allowed surgeons to accurately perform the risky operation. “When you are responsible for the lives of two infants,” says surgeon Anthony Sandler, who led the operation at Children’s National Medical Center in Washington, “you want a tangible, physical feel for the challenges to come.”

The goal of the 3D-Printed Habitat Challenge is to design a habitat that could be built with 3D printers using local materials or a mission’s waste products. “The vision,” says the website, “is that autonomous habitat manufacturing machines will someday be deployed to the Moon or Mars to construct shelters for human habitation.” Although 3D printing is hardly ready to go to space, it’s never too early to start planning ahead.

Contestants were challenged to design a living space for a hypothetical set of four astronauts. The 1000-square-foot habitat would need to contain life support systems, bathrooms, cooking areas, and sleeping quarters.

The top 30 designs have been selected, and may be whittled down before the final judging at New York City’s Maker Faire at the end of September.

Popsci will show you the pods

We downloaded the models from GitHub, tweaked, printed, and gained access.

Of course, the reason we’re revisiting this topic now, almost a year after the leaked images, is that a few enterprising hackers (in the correct sense of the word “hacker”) have put together 3D printable model files of the TSA keys and uploaded them to a GitHub repository. Now, rather than needing specialized skills and tooling to craft a duplicate Travel Sentry key, all you need is a 3D printer that can handle STL files (and that’s basically any 3D printer).

Watch the video over at ARS