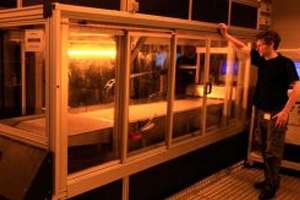 3D printing, one of the pillars of the future of manufacturing, is no longer just about rapid prototyping: it is now also about mass production.The keys to this next generation of industrial additive manufacturing lie in technological improvements to the 3D printers themselves and the materials they utilise.

The ability to quickly produce items strong enough to serve as end-use products has not gone unnoticed by industry participants. Some, in fact, have already integrated 3D printing into their production processes.

Local Motors, for example, is well on its way to printing entire cars. Justin Fishkin, the company’s chief strategy officer,  told 3DPrint.com in March that he envisions a 12-hour print time for complete cars (down from 44 hours just this past September), with close to 50% of materials being sourced from recycled vehicles, and the remainder including advanced materials such as graphene. The company’s model suggests that in just a few more developmental years, fully customised, ready-to-drive automobiles could be chosen piece by piece via touchscreen at a dealership, manufactured on-site, and rolled off the lot the same day.

On the aerospace side, GE Aviation has been investing significantly in new advanced manufacturing facilities as well, infusing more than $300m over the past seven years to boost its capacity and produce some 100,000 3D-printed parts by 2020. Two months ago, the company announced that more than 400 planned GE90 engines had been retrofitted with a sensor housing produced via 3D printing using a cobalt-chrome alloy powder. Bill Millhaem, the general manager of GE Aviation’s GE90/GE9X engine program, notes, “Additive manufacturing has allowed GE engineers to quickly change the geometry through rapid prototyping and producing production parts, saving months of traditional cycle time for the T25 sensor housing without impacting the sensor’s capabilities.” The US Federal Aviation Administration granted certification to the sensor housings in February, indicating readiness for in-flight use.

The change is not confined to large scale production, however. Some, like MarkForged, for example, are working to bring the materials revolution to desktop 3D printers. The company, which is also behind the Mark One, is now fine-tuning its reinforced, end-use product offerings for the creation of carbon fibre-, fibreglass-, and even Kevlar-reinforced designs. According to Jeff Klein, the company’s creative director, the final material specifications indicate that MarkForged’s carbon-fibre continuous filament fabrication, for instance, can produce materials 20 times stiffer than plastic, well ahead of the 5-times-greater strength initially anticipated.

To date, the bulk of large-scale manufacturing’s use for 3D printing techniques has been for rapid prototyping, where the ability to print on-site and iterate multiple times a day—as opposed to over months—has given a strong advantage to 3D printing.

With materials advances and faster printing, however, mass production of customised products is now in sight—a stride forward that will affect major industrial sectors from tooling to aerospace.